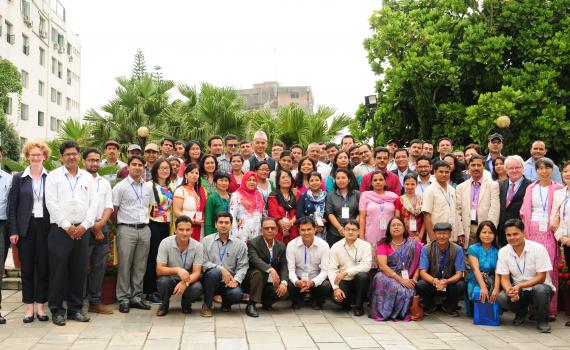 Over 80 participants attend the first seminar in Nepal dedicated to library copyright issues, on 3-4 September 2015 in Kathmandu.

In 2015, EIFL initiated work on copyright issues for the benefit of libraries, and persons with print disabilities with our partner, the Nepal Library and Information Consortium (NeLIC).

There were two main outcomes. A ‘Right to Read’ campaign was formed by civil society stakeholders to encourage ratification by Nepal of the Marrakesh Treaty for persons with print disabilities (2013). The library community was invited to dialogue with policy makers regarding copyright law and library activities and services.

On persons with print disabilities, the Nepal Association of the Blind estimates that of the c. 40,000 school and college-age children who are blind or visually impaired, only 10% receive education. Those who do attend education are often excluded from learning because of lack of audio and Braille books. As a result, future employment prospects are very low.

Ratification of the Marrakesh Treaty by Nepal and the introduction of exceptions in domestic law to allow for the creation and distribution of accessible format copies provides an opportunity to significantly improve the situation. By making it legal to create accessible formats, funds can be raised and projects initiated to increase the amount of accessible format materials available.

In addition, people in Nepal could benefit from the treaty’s cross-border provisions. Since many people in Nepal speak Hindi, accessible materials could be immediately imported from India (the first country to ratify the treaty in 2013). For English speakers, materials from English-speaking countries that have joined the treaty, such as Australia, Singapore and the UK may likewise be imported.

On libraries, the 2002 Nepal Copyright Act does not enable libraries to maximize the use of digital technologies. It also falls short of the copyright exceptions for libraries in other countries.

While the law has provisions for libraries, in many cases, the provisions are quite limited and do not properly address new technologies or services that libraries in Nepal may wish to provide today. For example, support for education and preservation falls short, provisions on lending are unclear, and new issues such as orphan works, web archiving, and text and data mining are not catered for.

Following a process of political reforms, a new constitution was adopted in 2015 and elections for the National Assembly took place in 2018. The new constitution guarantees the rights of persons with disabilities including access to education and social justice. In addition, the Disability Rights Act (2017) adopted a new rights-based approach to disability. With these developments, EIFL is supporting take-up of the Marrakesh Treaty, and library copyright reforms.