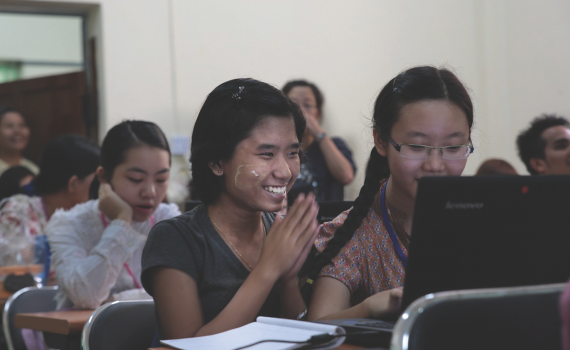 Students learn to use e-resources at the University of Yangon.

Having timely access to the best international teaching, learning and research resources is essential for high quality education and research, and thereby for social and economic development.

The online availability of global scholarship has opened up exciting new possibilities for academic institutions worldwide, and the opportunities are greatest for those in developing countries such as Myanmar where libraries do not have extensive print collections. Now, given appropriate support, institutions and their libraries have the potential to “catch up” quickly.

There are 158 universities in Myanmar under the Ministry of Education. After years of isolation, their libraries have very limited current print collections.  What’s more, until the start of the eLibrary Myanmar project in December 2013, no universities had access to online subscription resources.  As a result, research standards and output have been undermined, and students have missed out on the opportunity to acquire the skills and knowledge they need to succeed both in education and the workplace.

The eLibrary Myanmar project was created to enable libraries at universities under the control of the Ministry of Education to provide effective support for teaching, research and learning across all faculties - from the sciences to the social sciences and humanities.

Major results of the project have been to provide access to an impressive range of high quality international journals, databases and e-books to a growing number of academic and research institutions; the creation of institutional open access repositories – the first in Myanmar - at two universities, and development of a library consortium to grow and sustain the project. In addition the project has built capacity of students, faculty and librarians in copyright, open access and raised awareness about the changing landscape of scholarly communication.

This is a turning point. In the coming years, any major achievements from our university in teaching, learning and research will be related to the EIFL eLibrary Myanmar project.
Dr Kyaw Naing, Pro-Rector of the University of Yangon

WHAT’S IN THE E-LIBRARY

A wide range of high quality international e-resources is now available to faculty and students at partner universities through the eLibrary Myanmar project. View the full list here.