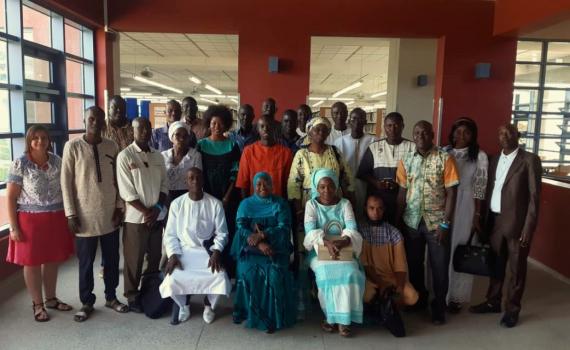 Participants in a series of workshops on open access policies and repositories hosted by EIFL and the Consortium des Bibliothèques de l’Enseignement Supérieur du Sénégal (COBESS) in Dakar October 2019.

In 2013, As a result of the workshop, the Rector of  Cheikh Anta Diop University of Dakar (UCAD), which is the oldest university with the largest number of professors and academic staff in Senegal, issued Circular No. 721 addressed to deans and directors of research institutes inviting candidates applying for evaluation and promotion at CAMES (Conseil Africain et Malgache pour l'Enseignement Supérieur) to register and deposit their articles and theses and dissertations in a digital library, which serves as an institutional OA repository.

Dakar is also the headquarters for CODESRIA (the Council for the Development of Social Science Research in Africa), and EIFL had the opportunity to raise awareness about OA policies, repositories and journal platforms to a wider audience at the Fourth CODESRIA Conference ‘The Open Access Movement and the Future of Africa’s Knowledge Economy’ on 30 March - 1 April 2016. Delegates to the conference adopted the ‘Dakar Declaration on Open Access Publishing in Africa and the Global South’, which calls on scholars/researchers and students, policy makers and other stakeholders to undertake research and share findings of research that will improve the quality of people’s lives.

In 2019, EIFL gave a keynote address at the first open science conference in Africa (23 - 25 October). The conference, themed ‘Open Science in the South. Issues and Perspectives for a New Dynamic’, released the ‘Declaration for the Sharing and Opening of Research Data for Sustainable Development’ [in French].

In 2020, COBESS  and EIFL are working on a new national repository project, discussing policies, workflows and rules of participation.