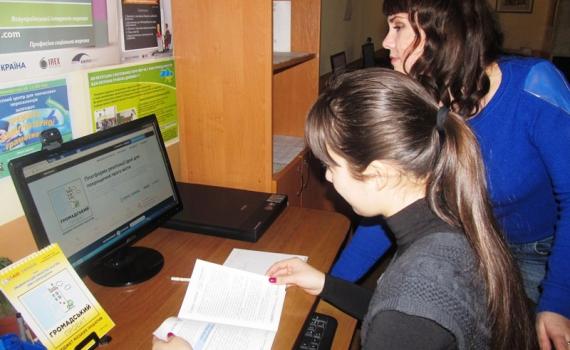 Librarians in Central City Library ‘M. Lermontov’ help a voter to vote for her favourite proposals.

The library became involved when the Melitopol city council announced that it had allocated 2 million Ukrainian hryvnia (about 75,000 USD) for a city-wide development initiative. The council wanted to engage citizens in developing proposals for funding, submitting the proposals online, and then voting online for the proposals they thought should be implemented.

However, just 50% of homes in Melitopol, a city of about 156,000 people, have internet connections. The city council was concerned that lack of internet access would exclude many people from participating in the initiative, and reduce the number of good ideas for improving the city.

PUBLIC LIBRARIES AN OBVIOUS CHOICE TO SUPPORT THE INITIATIVE

The library network was an obvious choice.  Located across the city, the libraries are close to communities; they have well-equipped computer centres with free public internet access; their librarians have experience of training people to use computers and the internet and a history of helping people to use e-government services like registering for housing subsidies and making online payments.

After receiving training from city officials, the libraries began engaging citizens. For the next two months, librarians were extremely busy helping people develop and submit proposals. In November, voting began.

PUBLIC LIBRARIES ARE ‘A POWERFUL TOOL’

The results were outstanding. “The project has shown that the library can be a powerful tool in engaging citizens in the implementation of citywide development projects,” said Yulya Dolinskaya, librarian at Central City Library ‘M. Lermontov’.

At a meeting held to assess the role played by libraries, government officials observed that because citizens trusted librarians, they were happy to provide them with personal data for entry into the voting system, and to vote using library computers.

Olga Zvereva, the author of one of the winning projects, for an open air cinema in a city park, thanked the librarians for their active assistance in ensuring an honest voting process.

A representative of the Melitopol City Disabled Society commented on the valuable support librarians had provided for people with disabilities, especially for giving the time needed to help people with visual and musculoskeletal problems.