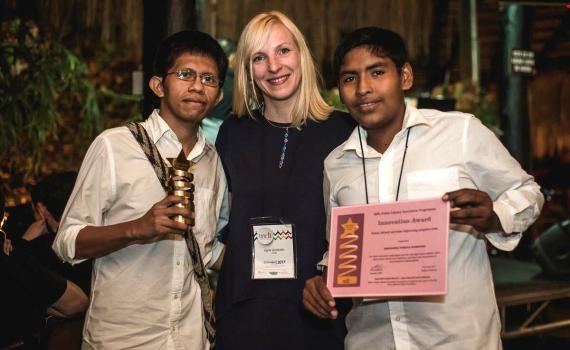 By encouraging children to go out into their community to conduct interviews, take photographs and make videos, Kankuaka Public Library in Colombia is raising awareness of children about their community’s culture and traditions, and the need to protect the mountain ecosystem.

Situated in the Sierra Nevada de Santa Marta mountains in northern Colombia, the library serves groups of Amerindian people, mostly from the indigenous Kankuamo community. The Kankuamo believe that the Sierra Nevada de Santa Marta, which are the highest mountains closest to the sea, are sacred. The laws and culture of the community are closely linked to the natural environment.

However, the mountains are also full of natural resources and so are attractive to mining companies. The mountain communities, who mostly earn a living from farming and making crafts, are deeply concerned about that their way of life and precious environment are threatened.

Every Saturday children meet in the Kankuaka Public Library ‘#Kandurumalab’, which is a space equipped with cameras and video recorders, and other tools to inspire creativity, to share their concerns about the future and to generate ideas for protecting their culture and environment.

Guided by librarians, the children go out into the community to gather information. They interview older people, collect photographs and traditional objects, and capture scenes from village life and the environment on camera and video. Back at the library they write stories, create exhibitions and draw maps of the community.

“The initiative has strengthened links between the generations. Different generations are sharing knowledge about how to develop the community, and how protect this great ecosystem,” said Souldes Enrique Maestro Montero, head of the library.

‘KNOWLEDGE GOES FAR BEYOND THE WALLS OF OUR LIBRARY’

Twice a year, the library invites people with expertise in digital media from the National Library Network of Colombia and volunteers from Javeriana University to work with the children to create films and animations based on their research.

The library has created a website, Atanquez.com, for for sharing news about the project and posting stories, photos and videos.  The Guardian of the Sierra, an animated film based on the children’s drawings, in which a community robot struggles to protect the environment from a mining robot, has been presented at many film festivals in Colombia.

“In this way, curiosity, creativity and knowledge go far beyond the walls of our library,” said Maestro Montero.

Use of the internet to spread messages about the need to protect the environment has worked, and the library has received many requests from other communities who want speak out about this important issue.